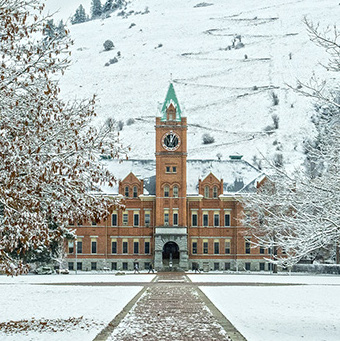 U to You Lecture Series

Professor Department of History and Philosophy

Named to the Wallace Stegner Endowed Chair in Western American Studies in 2016, Mark Fiege is an author and speaker on the American West, the environment, national parks and public lands. His lecture will focus on public lands as unifiers in these times of division and disharmony.

Professor of graphic design in the College of Arts and Architecture

Jeffrey Conger is an outspoken advocate on the subject of dyslexia. In his talk, he will go beyond the challenges of reading and spelling to focus on advantages of dyslexia, including out-of-the-box thinking, 3D spatial processing and recognition of complex patterns. He will show how this neurodiversity is a hidden superpower to be leveraged within several career paths.

Conger is a professor of graphic design in the College of Arts and Architecture at MSU and co-founder of the Dyslexia and Innovation Symposium. He has developed pilot courses for those with learning differences and served on the Montana Office of Public Instruction Dyslexia Task Force.

He also is a professional photographer, designer and author who specializes in motorsports. His cover shots have appeared in publications including Hot Rod, Automobile Rod and Custom, Classic Trucks and Super Streetbike.

Fellow in the Maureen and Mike Mansfield Center, teacher of political science

The Myth of Chinese Capitalism: Challenges to China’s Future as a Global Superpower

Prize-winning writer and speaker Dexter “Tiff” Roberts is the author of the book “The Myth of Chinese Capitalism: the Worker, the Factory and the Future of the World.”

He publishes a weekly newsletter, “Trade Wars,” on Chinese business and politics. In addition, Roberts is the winner of numerous awards for reporting in publications including the Los Angeles Times, Wall Street Journal and Bloomberg Business Week.

He has a bachelor’s degree in political science from Stanford University and a master of  international affairs from Columbia University. He studied Chinese at National Taiwan Normal University.

Geosciences researcher Hilary Martens directs a research group that studies the interactions between Earth and its water surfaces. Her presentation will explore how Earth-observing satellites are revolutionizing our ability to monitor water and drought.

Her research uses state-of-the-art techniques that treat the Earth as a giant scale in which the weight of water and snowpack create subtle changes in the shape of the Earth that can be measured from space. Tracking changes in the Earth’s shape over time sheds light on seasonal and long-term changes in snowpack, groundwater and even glaciers, advancing the understanding of drought and climate.

Martens’ research also covers earthquakes, including the 2017 earthquake near Lincoln, MT., the largest quake to strike Montana in more than half a century. She hopes to have a few minutes to spare in her lecture to address Montana earthquakes.

While earning her doctorate in geophysics at the California Institute of Technology, Martens began her initial research into the relationship between ocean tides and changes in the Earth’s shape. In 2021, she received $443,627 from NASA for her tides studies. Last fall, she was awarded a $689,069 grant from the National Science Foundation.

She received her undergraduate degrees in music and physics at UM as a presidential scholar in the Davidson Honors College.

The 2023 lectures will be held in person at Great Falls College.

Tickets also available at Kaufmans and Leslie’s Hallmark in the Holiday Village Mall.

The "Bringing the U to You" Lecture Series is a collaborative effort of the UM Alumni Association and the MSU Alumni Foundation.

If you have questions regarding these lectures, contact the UM Alumni Association at 406-243-5211 or at alumni@umontana.edu

The U to You Committee is a group of the University of Montana and Montana State University alumni committed to connecting the campuses to the Great Falls area through stimulating educational experiences.