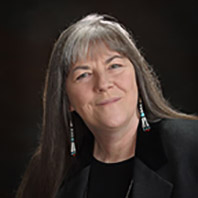 Kathryn W. Shanley is a professor of Native American Studies and chair at UM as well as the special assistant to the provost for Native American and Indigenous education. She has published widely in the field of Native American literature, most notably on the work of Blackfeet/Gros Ventre writer James Welch and Ojibwe writer Gerald Vizenor. She co-edited “Mapping Indigenous Presence” in 2014 and currently co-edits the Yale University Press “Henry Roe Cloud American Indians and Modernity” series. Shanley served as president of the Native American and Indigenous Studies Association from 2011–2013 and was a regional liaison for the Ford Foundation Fellowship Program for 15 years. She is an enrolled Nakoda from the Ft. Peck Reservation in Montana, where she grew up.